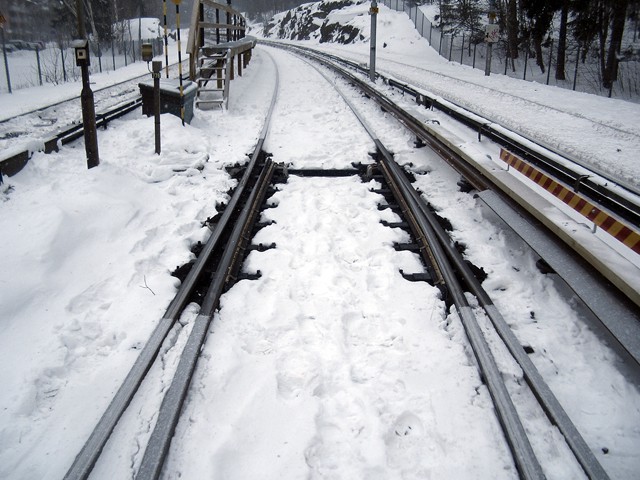 In regions with frequent and long frost periods, rail and rail switches covered with snow and / or ice may cause possible accidents.

For trouble-free train operation in winter conditions, rail and point heating is recommended to ensure that the track surface is free of ice and snow and moves points. 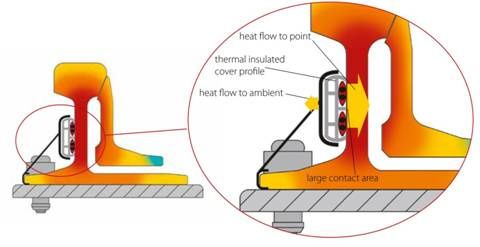 We have developed an excellent system to ensure safe and trouble-free railway traffic even when there is snow and ice. We offer a specially developed EL-Rail heating cable and mounting system, efficient and economical heating. 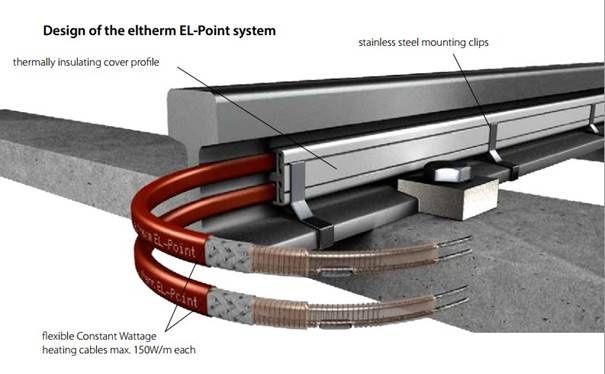 Brief Information About Railway Lines in Our Country Travers and Ballast System
Railway lines operated within TCDD in our country are generally ballasted, the lines built before the Republic and in the first years of the Republic are wooden sleepers. These lines have been replaced with concrete sleepers over time. The sleeper dowels, which have worn out over time, are removed by the grinding process and new dowels are placed in their place. The subway and light rail system lines built to provide urban transportation are generally ballast-free lines. In addition, in ballast systems, mobile and machine tamping machines are used to ensure that the ballast is well settled and compacted. Ballasts that have completed their useful life are removed at regular intervals with heavy construction equipment or vacuum systems and replaced with new ballasts.

Rail Types Used:
While S49 and UIC60 type rails are generally used in TCDD lines, in addition to these rails, Ri59 and Ri60 type grooved rails are also preferred in other enterprises.

Rail Resources:
Generally, while machine butt welding is performed on main lines, Termite welding (thermit) is used in many lines. In our country, Elektro thermit, Railtech and Plötz products are preferred for termite rail welding. Rail temperature should be checked during welding, and Magnetic Ray thermometer should be used for this process. In the termite welding system, the distance between the two rails should be 7 cm at most. To achieve this, stress relief machines (Rail Stressor) are used. The welding made after welding is stripped with the welding stripping machine and the remaining excess is smoothed with a rail grinding machine.

Rail Lubrication Systems
A fixed rail lubrication system is generally used to prevent rail-wheel wear and reduce the sound level, especially in urban lines, narrow curves and switches. Before the train enters the curve, lubrication is done by applying oil to the rail from the points placed at certain intervals on the return by means of a sensor. There are also some portable lubrication equipment. 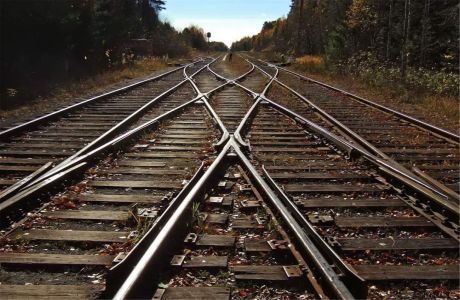 Prevention of Ice on Rails

Rail Fasteners
They are the elements that connect the rails with each other and with the sleepers. Generally, there are turrets, bolts, clips, algebras and spring clamps. In the process of tightening and loosening these turrets and bolts, machines called tyrfonoz and bulonez are used. In addition, rail drilling machines and hand-held turphonesis are used in the assembly of algebras. In this regard, companies such as the German Vossloh group and DTM Elektro Mekanik are producing in our country.

The most crucial part of railways is signalization. The conductivity of the rails is used for signaling. Arc welding has been used in our country for years in rail crossings, however, it has been understood that this system has damaged the chemical structure of the rails and has been abandoned. Now, for rail transition connection, it is preferred to fix the bonds to the rail with aluminothermit welding or to be mounted on the rail with specially manufactured fasteners (Single Contact – Double Contact).

Copper cables with increased conductivity are used for rail connections in world standards, however, steel cables are still preferred in our country.

In Aluminothermit cable welding, the cable lugs are attached to the rail by melting the welding powder poured into specially manufactured molds on the side (web) parts of both rails.

In the other method, double-sided or one-way dowels are placed on the rail drilled by a rail drilling machine.
These dowels are fixed to the rail with a grown hydraulic dowel expansion machine (Bonding or Bonding machine). Cable lugs are mounted to these anchors with special conductive screws (contacts).

In rail drilling machines, besides the Rotabroach brand that we represent in our country, Robel and Geismar brands are also sold. In bonding machines, fasteners, bonds and contacts, ERICO is the most important manufacturer in the world. Also available in manufacturers such as Furse and KLK.

Electrification
Electrification has increased in importance with the increase in high speed train lines and the transition from diesel locomotives to electric locomotives in recent years. Especially in metro and light rail systems, catenary systems are very important.

The most important controls are the detection of cracks, fractures and abrasions that may occur in the transverse and longitudinal rail. Ultrasonic sound waves and laser beams are used in these detections.

In addition, there are radar systems that detect wear and tear on sleepers and the availability of ballast. These systems also control the fasteners. Periodic checks on all lines are very important in terms of life and property safety.